Showing posts from November, 2014
Show all

No home for refugees in Manus Refugees from the detention center will not be allowed to resettle on Manus, the province’s Governor, Charlie Benjamin, has revealed.

According to the Post Courier (November 7), the Governor was not aware of the National Executive Council (NEC) decision to finalize the process necessary to grant citizenship and engage skilled refugees.

Mr Benjamin said:
“It’s news to me and they will not find a home in Manus…they won’t be resettled here permanently, they are here to be moved to another country.” The Governor said he welcomed the prospect of asylum seekers being released and settled but it is not his long term vision for the province.

He said the detention of asylum seekers on the island was a part of the Australian Government’s off shore processing policy designed to discourage dangerous boat journeys to Australia, and Papua New Guinea (PNG) did not need to discomfort its own people while hosting another country’s burden. 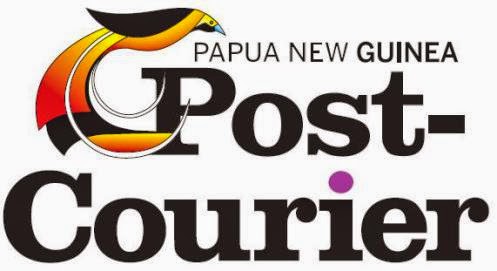 A forestry company has filed a lawsuit against South Pacific Post Ltd, which owns Post Courier, and its editors regarding articles published on September 3, 4 and 19, 2014, The National (November 5) reports.

The articles purportedly revealing the company’s links with known or suspected terrorist and Islamic extremists was published both in print and online, and attracted the attention of international media organizations including The Guardian and ABC.

The company, Cloudy Bay Sustainable Forestry Ltd, filed a writ of summons against the newspaper claiming damages up to K584 million (US$ 200 million).

In a public statement, the company said the publications were “grossly defamatory” and “published in bad faith” which resulted in the “cancellation of commercial contracts”.

The company directors are seeking aggravated damages on the basis that the Post Courier editors knowingly published information that was false.
Other sources of interest:Post Courier sued for US$60 millionFamily from …
Post a Comment
Read more

The political power struggle between Ijivitari MP, David Arore, and elected Northern Governor, Gary Juffa, is far from over with the former challenging the latter to take the matter to court, Post Courier reports.

Arore, who forcefully ‘removed’ Juffa and appointed himself Governor, maintains he is the elected Northern Governor despite other national leaders saying contrary.

He said the seven local level government presidents who support him want him to maintain the seat until the 2017 elections or until the court makes a ruling.

Arore also distanced the Prime Minister and his PNC party, and Sohe MP, Delilah Gore, from any involvement in the issue. He maintained that it “is purely the politics of Oro (Northern).”

The Ijivitari MP maintains that he is the Governor elect and called on Juffa to test the illegality or legality of the move he made in court.

Meanwhile, Juffa is considering legal action and may file an application in court today. He said anyone trying to recognize Arore as …
Post a Comment
Read more

The Papua New Guinea Accident Investigation Commission (PNGAIC) has come out publicly to set the record straight after reports emerged from The National newspaper regarding the Twin Otter crash on September 20, 2014.

Inau said the paragraph which stated that the “preliminary report into the accident involving HeviLift’s Twin Otter that crashed on September 20 at Mt Lawes suggested miss-communication between the pilot and tower controller” was “completely incorrect” and the report only contained factual information and does not suggest anything.